Ants are social insects that belong to the same order as wasps and bees. Each ant is a member of a highly organised colony or nest which can sometimes consist of millions of individuals. Within a single nest, there are workers, soldiers, drones and queens and colonies can occupy and use a wide area of land to support them.

There are about 11,880 known ant species, most of which are tropical. Ants are extremely social creatures and their ability to adapt to most environments has enabled them to colonise almost every landmass on Earth.

The black garden ant is the most common ant in Britain, and can be found across all regions of the UK. Keen explorers, black garden ants are most active during the early summer months as they attempt to increase the food supply to their queen and her young.

Black garden ants can often become a problem for gardeners as they farm aphids, which can subsequently attack crops of fruit and flowers.

Black garden ants do not pose any major threat to our health, but they can become a real nuisance when they enter our homes and workplaces.

Effective control of the black garden ant is only viable on a small scale. It is generally accepted that the best method is through barrier spraying at wall / floor junctions. Large infestations should be tackled by a pest control professional who can use the correct type of insecticide for the job. 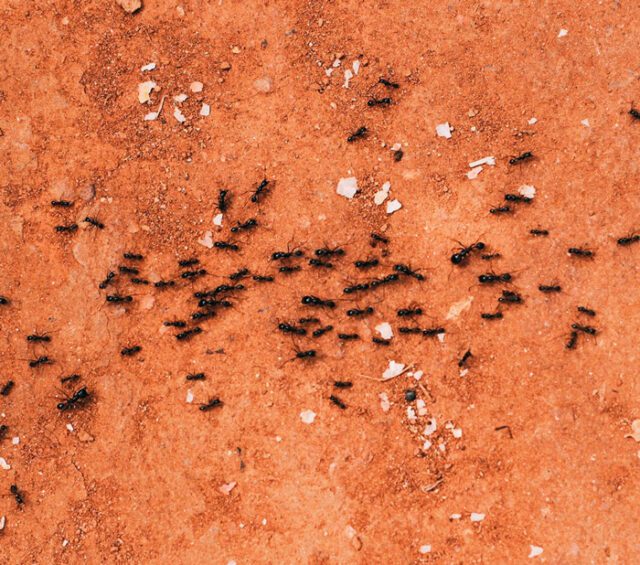 Fleas are small wingless insects that live off of the blood of a variety of mammals and birds. A flea bite often causes an itching sensation, which in turn may result in the host attempting to remove the pest by biting, pecking, scratching etc.

Not just a source of annoyance, some people and animals suffer allergic reactions to flea saliva, which can remain itchy and inflamed for up to several weeks afterwards. In addition, fleas can also lead to hair loss as a result of frequent scratching and biting by the animal.

Adult fleas are small agile insects usually around 2-3mm long. They are usually reddish-brown in colour and have long hind legs for jumping.
Flea larvae are small and pale with bristles covering their worm-like body.

Adult fleas must feed on blood before they can be capable of reproduction. Female fleas can lay 500 eggs or more in their lifetime, which take the form of tiny white oval-shaped eggs. They are laid in batches of up to 20, which usually roll onto the ground from the host itself.

Flea larvae emerge from their eggs after around 14 days and will feed on any available organic matter such as dead insects, faeces and vegetable material. Given an adequate supply of food, the flea larvae will pupate within another 14 days and can remain in that state for a number of months.

A flea’s total lifecycle can take as little as two weeks, but may be lengthened to many months if conditions are favourable. Adult fleas feed on the blood of the species to which they are adapted but cat, dog and bird fleas will often also bite humans.

Pest control of a flea infestation requires repeated application of insecticide. A flea population is unevenly distributed, with 50% eggs, 35% larvae, 10% pupae and 5% adults, and so measures must be taken against each stage of the flea lifecycle.

In addition to the utilisation of a pest control company, another useful trick against fleas is to burn a floating candle in a plate of water with some cleaning agent. Fleas are attracted to the light, and of course will drown when they approach the candle.