Mole Treatment for your garden

The mole population been dramatically increasing across many parts of the UK in recent years, partly due to exceptionally wet and mild winters.

This, coupled with abundant food supplies and little in the way of pest control taking place, has enabled the humble mole to freely multiply to almost plague proportions. Moles have been reported appearing in places that previously had never had a mole problem – gardens, grass verges, playing fields, bowling greens – all have been invaded.

Appearance
Both adult male and female moles are approximately 15cm long and weigh around 4oz. They are covered by dark grey hair, which is velvety in texture.

Lifecycle
Moles are solitary animals, and only come together in February when male moles are sometimes allowed to get close to female moles. They remain together for only a few hours, after which they once again go their seperate ways.

During April and May the young are born in an extra-large molehill, built by the mother and known as a fortress. There are usually 4 baby moles in a litter, and they are both naked and blind. At 14 days the young have fur and their eyes open after 22 days. After 5 or 6 weeks they leave the nest and move above ground in order to find their own territories.

The average life span of a mole is around four years.

Moles are notoriously difficult to catch: something which is largely due to their complex underground labyrinth of tunnels. There exists many varying depths of tunnels, some very shallow, almost on the surface, whilst others are quite deep. The moment the mole detects a strange smell or sudden vibration, he retreats at remarkable speed, to the safety of the deeper runs, blocking the tunnel behind him as he goes.

Apart from using carefully regulated gas techniques, the only method for successfully catching moles, is to trap them using a variety of different traps. Once you have located a mole run, a trap can be placed inside the tunnel, which will trigger the closing mechanism when movement is felt inside the trap.

Traps can be purchased from garden centres, but must be weathered before use in order to remove any trace of scent or oil acquired during manufacture. When using traps, success cannot be guaranteed and many people opt for professional assistance in order to control their local mole population. 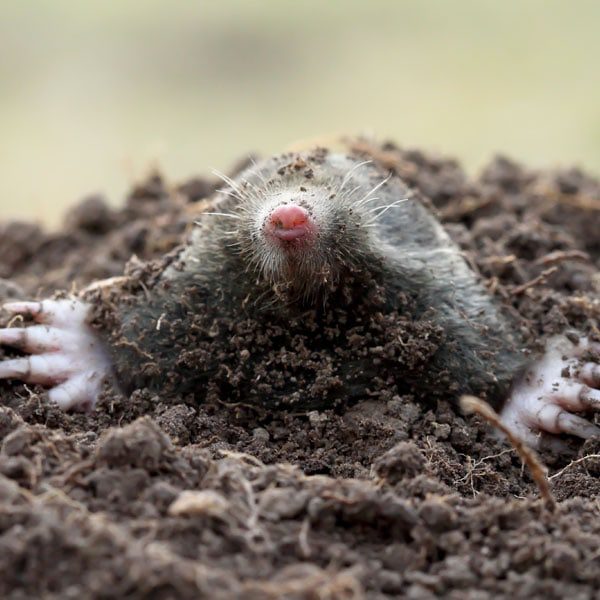 Rabbits were probably introduced into Britain from France in the 11th century by the Normans, who kept them for meat and fur. Descendents of the few which escaped from captivity can now be seen throughout the UK.

Rabbits will eat almost any vegetation in a garden, and can be a true pest. A sure sign that rabbits have invaded your garden is the faecal droppings and pellets scattered over the area that has been damaged. Rabbit droppings are very coarse and spherical in appearance and quite unmistakable for anything else.

Appearance
Colour can vary slightly from light brown to grey through to black, but generally they are brown with long dark hairs giving a well camouflaged appearance. An adult will weigh in the region of 1.7kg but larger specimens often occur. The bucks (males) have a broader head and heavier body than does (females) and often show signs of fighting for dominance of a warren, with ragged and torn ears being common.

Breeding mainly takes place between January and July but can occur any month, with young females capable of breeding at 3-4 months of age. Gestation is 28-30 days with an average litter size of 5. Females are capable of breeding 4-5 times a year in ideal conditions. Mating and conception within 24 hours of parturation usually occurs with ovulation being induced by mating.

The young are born hairless with their eyes closed in a nest chamber called a ‘stop’ which is prepared by the doe. This can be within the main warren, but more commonly is a short distance away, and is a short dead end tunnel. The entrance is blocked when the doe has completed feeding (which takes place at 24 hour intervals), to prevent predation. The stop contains dry grass and bracken and is lined with fur from the doe’s under parts. Eyes of the young rabbits open at about 10 days and weaning takes place at 3-4 weeks of age.

Rabbits feed by grazing, taking any young shoots close to cover and nibbling them down squarely to 10mm or so above the ground. In cereal crops extensive grazing can occur and crop loss can run into many £1,000’s.

Rabbit populations can be brought under control by shooting and trapping. A rabbit proof fence (3ft high) can also ensure rabbits don’t freely wonder onto your land. 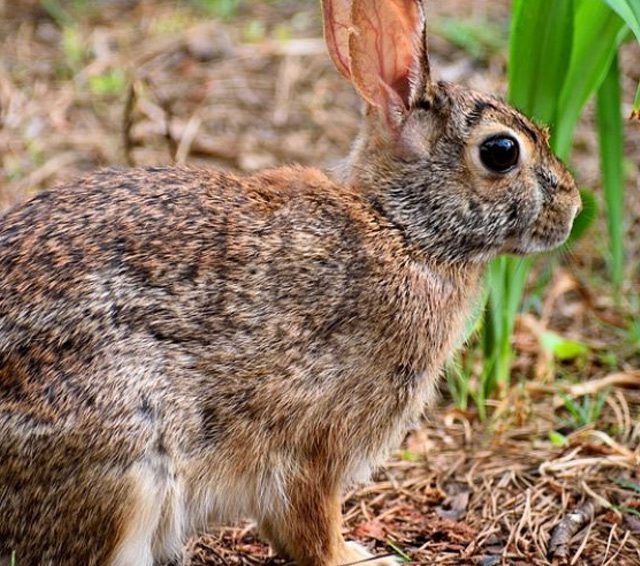