The larvae (known as woolly bears) of these small, oval beetles have outstripped the clothes moths as the major British textile pest. The Variegated Carpet Beetle is 2 to 4mm long, like a small, mottled brown, grey and cream ladybird. The related Fur Beetle is black with one spot on each wing case, and there is a rarer Black Carpet Beetle.

The larvae are small (about 4mm long), covered in brown hairs, and tend to roll up when disturbed. As they grow, they moult – and the old cast-off skins may be the first sign of infestation. Adults are often seen in April, May and June, seeking egg-laying sites; and the grubs are most active in October before they hibernate.

The adult Carpet Beetle feeds only on pollen and nectar of garden flowers but lays its eggs in old birds nests, felt, fabric or accumulated fluff in buildings. It is the larvae from these eggs that do the damage. They feed on feathers, fur, hair, or wool and tend to wander along the pipes from roofs into airing cupboards – which house the clothes and blankets which constitute the food.

The life cycle takes about a year, and the grubs can survive starvation in hard times for several months.

Carpet beetle damage consists of fairly well-defined round holes along the seams of fabric where the grubs bite through the thread.

Check the loft and eaves for old birds nests or dead birds and remove them. Vacuum clean all fluff and debris from airing cupboards, shelves, floorboards, carpets and upholstery. Lift carpets and underlay and clean floor and carpet thoroughly.

An insecticide is needed to deal with woolly bears and affected items should be sprayed or dusted with a product labelled for carpet beetle control. Treat between floorboards, under carpets and underfelts and into crevices where fluff may collect and attract the insects.

Consider using a professional company as these pests can cause significant damage.

Woodlice are one of the few land crustaceans. They have oval, grey, segmented bodies 10-15mm long, with 14 legs and prominent antennae. Common names include slaters, sow-bugs and pill-bugs.

There are three species that enter houses from the garden – one of which, the pill woodlouse, rolls up into a tight ball when disturbed.

Woodlice are harmless feeders upon rotten wood or other vegetable matter in cool damp areas. They normally live underneath stones, clumps of plants, logs, or doormats, from which they may crawl into dark corners of a house. Rockeries with decking are great favourites with them.

No treatment is really necessary but if they persist put right any dampness, remove infested vegetation and use an insecticidal powder or long-lasting spray around door-thresholds or other points of entry. Amateur use products are available from your local garden center or hardware store. Just make sure you select a product labelled for control of woodlice.

For heavy infestations, we would recommend you contact professional pest control company, preferably a member of the BPCA to administer a treatment. A trained professional will have the technical knowledge and access to a range of professional use products and equipment which are not available to the public. 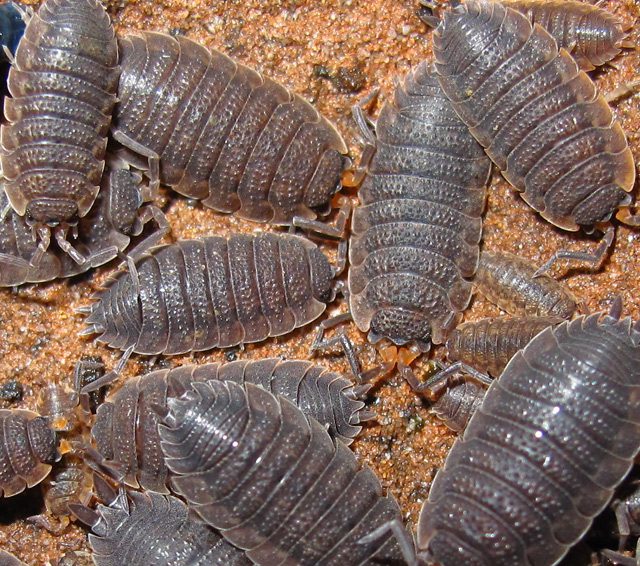